our prospective new neighbors are a hoot!! (lol!!)

So in the past few weeks we've heard some new, rather noisy neighbors around our house. They're not around very much; it seems like they're most active in the late afternoon / early evening time-frame, but I've also heard them a number of times very early in the morning-- when it's still dark out, even. I haven't complained about them, though, because really, they're more fascinating than annoying- at least to me, anyway. They sit in the oddest places, too-- we've seen them on the roof of our house, even! I have taken some photos of them, too, when I've been able to catch them in the act-- they stared, but didn't seem to mind it too much.

About now, you're probably wondering why I would do such a thing, think I'm extremely rude, and that we have really strange neighbors, right??

Well, you can judge for yourself... here they are: 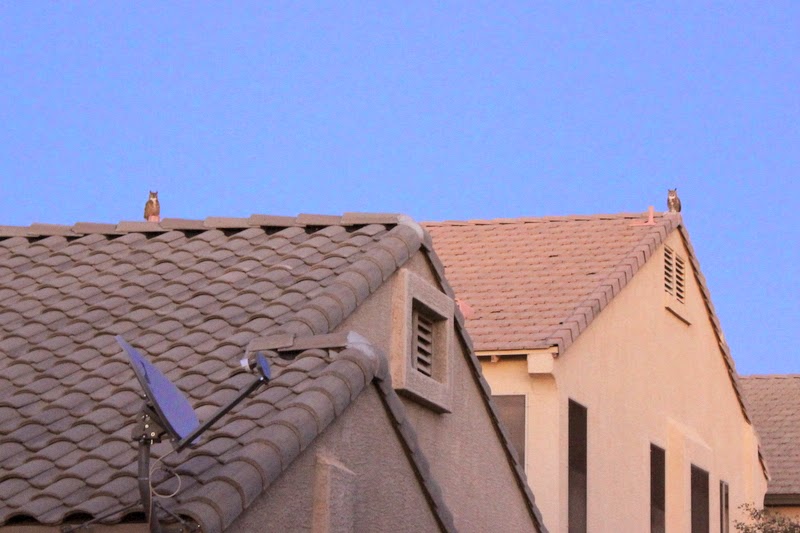 hahaha!! Did I have you going at all?? (probably not; I'm no good at jokes or telling stories...) It's a pair of great horned owls!! We started hearing them about a month and a half ago, just once in a while, but couldn't see them. Then, for a few days, they were around every afternoon just as it was getting dark. They would pick a vantage point on the peak or corner of one of the roofs, including ours, and do their hooting back and forth. 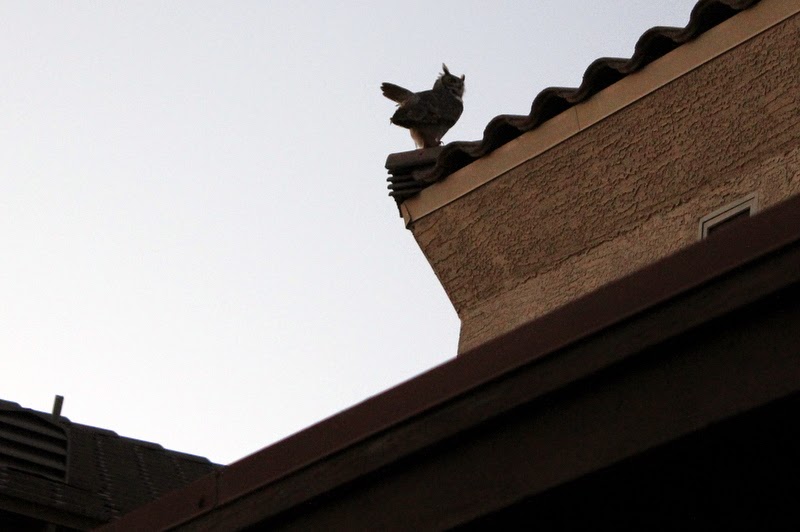 At first we only saw the one-- Tom saw it more often than I did, because he usually gets home from work earlier than I do, but I managed to see it/them a couple times, and even get some photos. (they're not the greatest, but hey-- at least it's photo proof that they were there!)

It was really cool to see them, and fascinating to actually watch them do their hooting... they sort of flip up their tail and puff up their chest as they do it, and it was kind of funny to see! Tom actually got a video of one with his tablet computer, I think... I'll have to see if I can edit and post it. (never done that before, so I'm not promising anything.) 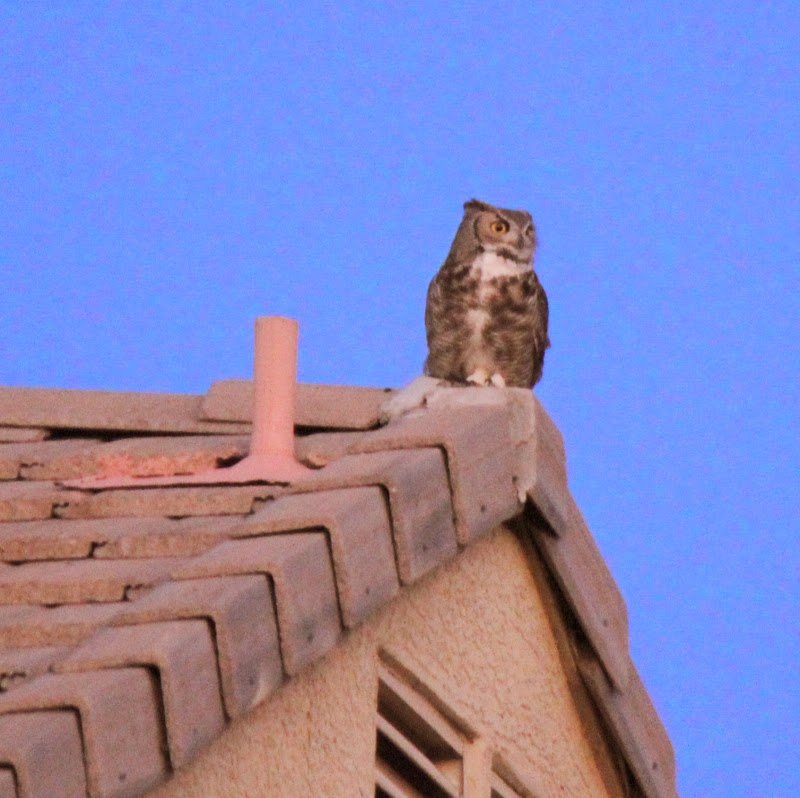 They're quite beautiful birds; very majestic looking. I read a bit about them in my trusty Roger Tory Peterson bird book, just enough to find out that the female is bigger than the male, and that they typically nest in January / February. Perhaps they were scoping out our neighborhood to see if they wanted to move in. (that would be so cool, if they did!!) 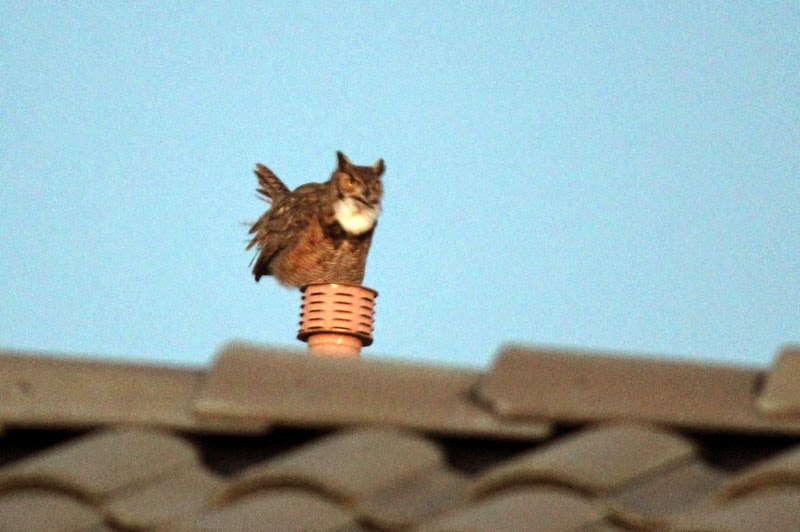 Here's a photo of the female (I think) in mid-hoot, two rooftops away from our house. They would talk to each other (and to Tom-- he had to see if he could get them to answer him, and they did) for quite a few minutes at a time, moving around from house to house. A couple times they were both very well hidden in one of the neighbor's trees, and if we hadn't seen them fly into the tree, we wouldn't have been able to see them at all. 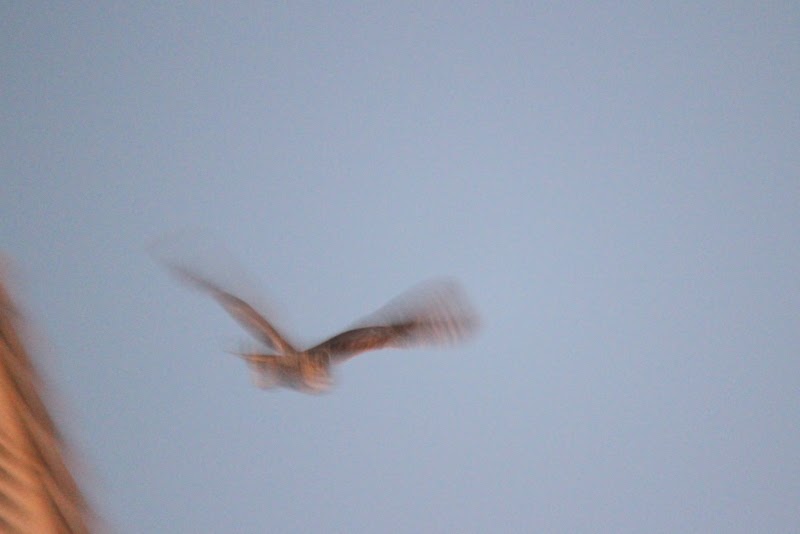 Here he is, right after take-off... blurry, but you can still tell that's what it is (at least I can, anyway, since I know what it is). It's pretty fascinating in an eerie sort of way to see them fly overhead, as well- their wing feathers are designed so they make little-to-know sound as they fly, so as to be better hunters. (A couple times they seemed to swoop kind of low over our heads, too, which was a bit unnerving!)

Unfortunately, we haven't heard them around for about a week or so-- maybe they didn't like our neighborhood after all-- maybe I was too much of a nosy neighbor! Or maybe that means the female is sitting on a nest; I'll be optimistic and hope for that. Either way, it was pretty neat while it lasted! (and it will make a neat scrapbook layout for the photo album.)