so far, we've had the entire place painted, put up new light fixtures (to be perfectly truthful, Tom put them up- I just helped to pick them out), got the place recarpeted and cleaned, and got new appliaces delivered. 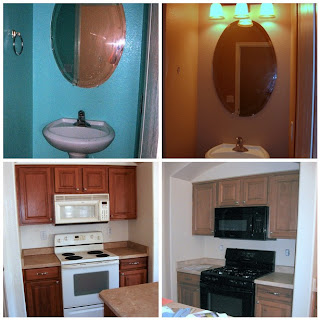 Small things do make a big impact- changing the paint color in the powder room made a huuuge difference, thank goodness! getting rid of the brass-and-bare-bulb light fixture (which you can't see in the before photo) also made a big difference in the feel of the room. Changing the wall color from white to beige and the kitchen appliances from white to black (to go with the black refrigerator we already own) also changed the feel of the kitchen. (changing from electric to gas was also a huge improvement, in my opinion!!)

we're moving this weekend, so there will be tons more changes- like our furniture finally being settled into the new spaces! I can't wait for it to be over with!! (thank goodness we're hiring movers this time- I'm already tired of hauling boxes upstairs.)

something to aspire to...

This is definitely something to aspire to; doing what you love your whole life long! --check out this youtube video found while blog-surfing, on Gypsyfroggie's blog.
Posted by crimsoncat05 at 11:25 AM No comments:

a link for when I make friends with my sewing machine again...

click this link: Moda Bake Shop Christmas Table Topper- a really cute 48-inch square lap quilt or table topper using 9-patch blocks that are cut up and shuffled around to make a more intricate pattern. I have done some sewing, but things with math in usually end up taking a turn for the worse in my experience. Maybe I'd better stick with the cross-stitching, and see how that goes first! (or, Mom, if you want something to do sometime...?? just kidding!)
Posted by crimsoncat05 at 8:47 PM 1 comment:

We've been working all spring on a huuuge project that's partway finished... here's a few pics to finally reveal to you what it is! --We're in the process of fixing up a house which we will be moving into in a couple weeks. I recently lost my job (!), so we decided to find a cheaper place to live. It's in another neighborhood in the same town, so it's only a few miles away. It was a foreclosed property, had been empty for almost a year, and was sort of beat-up, tired, and run-down feeling, so it needs lots of help. 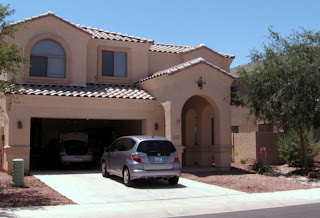 It's a two-story, which wasn't our first choice, but it's growing on us... the layout inside is really open, which is a big plus: 3 bedrooms upstairs, (one for my art studio, one for Tom's music room!!), an office, formal dining room space (which will be for the piano- we're not exactly formal dining room sort of people, so that space would be wasted otherwise), and a very open family room/kitchen space. (about the 2-story thing: Sedona remembers stairs, since we lived in a split-level house in Illinois when she was a puppy, but Bisbee has never seen stairs before and I think she'll need some "staircase special ed" --she managed to get up the steps, but absolutely refused to go down- I ended up having to carry her.) 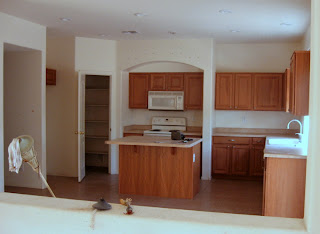 Above is the view into the kitchen from the family room the first time we saw it- this shows the open plan of the living area... it also shows the tiki torches the previous owners left behind, leaving lamp oil dripping down the wall and onto the carpet! (obviously, this pic is before we did any work on the place!) We got the whole place repainted (who uses flat paint on the walls in living spaces, anyway?? --there were smudges and smears everywhere, plus lots of staples, crayon marks, and tons of holes in the wall that we had to take care of); we also got new carpet, so we can start fresh with a stain-free, dirt-free, pet-hair free space. 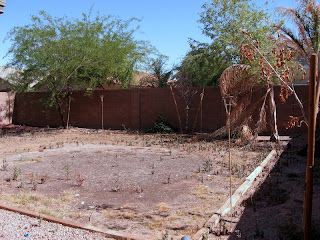 The backyard when we first saw it: this is another of the major projects that will take quite a while to complete!! It has irrigation already installed, so we may get the center area re-sodded eventually. So far, we took out the dead trees along the wall and pulled out a ton of weeds, and we've started adding some of our favorite desert plants to both the front and back yards. 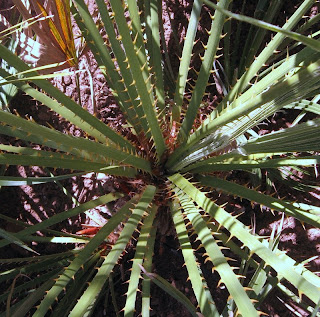 We took advantage of last week's heavy rain to dig up and move our Mediterranean fan palm to the new house. The rain helped soften the dirt to allow us to dig it up easily... it would have taken days of watering before we could have done it, otherwise! This tree didn't go quietly, though- the photo above shows the backwards-facing teeth these palm trees have on every stem... sort of like shark teeth!! (Tom and I both have plenty of scratches and battle scars from them, but we won the palm tree war.) 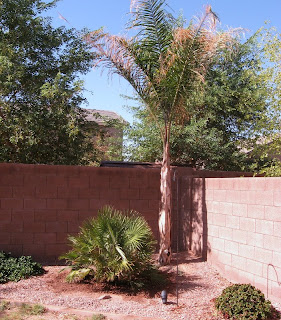 Here it is in the new backyard... it looks tons better than the dead palm tree, of course, and I think it will do well here with regular irrigation. (and minimal pruning, since I don't relish hurting myself again anytime soon!) I'm a bit ambivalent about moving- I will miss our house, but I'm excited to move forward from where we are now. I don't like the actual moving process, but I'm anxious to get it done, so we can start settling into the new house. (...and to set up my new art studio space, which I will show you when it gets completed, since that will be the one and only time it will be clean!)

After I started thinking about putting together a travel journal, I took a trip to Michael's (for embroidery floss) and ended up bringing back a Making Memories 8 x 8 inch scrapbook kit (I really loved the decorated cover, and the travel-themed tags, stickers, and doodads that were included!). Plus, it was on clearance! I don't know quite how that happens; I go to the craft store for one specific thing, and come back with three others...it's impossible for me to not look at the $1 section and the clearance shelf in those stores... darn their marketing managers!

I thought it was sooo cute, I showed it to Tom right away when I got home. He looked at it, and said "with all the stuff you have, you could make that yourself," which is true- and, after I started thinking about it, I decided 8 x 8 in. was going to be a bit too restrictive anyway, so the kit will be going back to Michael's. (... I did love the travel-themed doodads, though; I may have to make my own stash of doodads!)

So, I got out my stash of papers and gel medium, and went to work. (see messy table below for proof of creative frenzy) 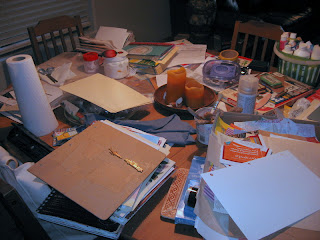 I got my inspiration from a journal made by Ingrid Dijkers for JournalFest- see her cool journal on her blog. Ingrid's journal started with a 3-ring binder- she took off the vinyl covering and recovered the binder with paper and images. I have plenty of boring white three-ring binders, so I found one and got to work. I decided to dispense with the binder altogether, and just use the covers loose with rings; this way, I can easily add as many pages as I want just by adding larger rings. So far, I've covered the heavy chipboard covers with brown paper bags for texture and more stability (a la Ingrid)... the covers will be painted, then decorated in a travel theme. 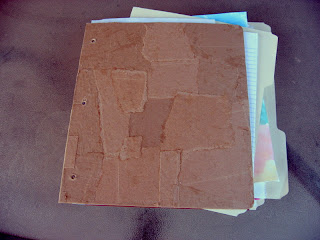 The pages inside are all different kinds of semi-sturdy paper- different colors of cardstock from my stash, and different sizes of hot and cold press watercolor paper. I will also add envelopes and paper bags as pockets to hold maps, pamphlets, etc. from the places we've visited. I've started painting and collaging some of the pages in preparation for adding the journaling elements. Tthis is the stage I like the most: the painting, cutting, and pasting stage- I get stuck on the "finishing" stage of things, probably from my "perfection" complex- I don't want to actually finish things, just in case they don't turn out as good as they are in my head... I really need to overcome that, though, otherwise this won't be much of a travel journal! 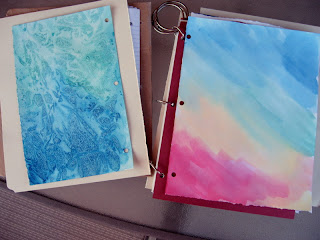 the photo below is a closeup of the left page above... I broke out my watercolor paints, and made the textured page below with green and blue watercolor paint and plastic wrap! Once you get the wet paint on the page, you put wrinkled plastic wrap onto the paper, which allows the paint to pool into the creases. I held the plastic wrap down with a magazine to keep the creases in place till the paint dried, and voila! a textured watercolor background- perfect for a photo of the Seattle Space Needle, I think!! 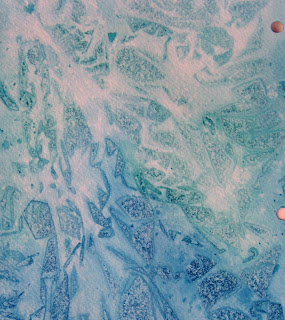 Now I just have to get my photos printed- keep your eye out for more travel journal work-in-progress!

...with thunder, and lightning, and dark skies, and everything!! (and a thunderstorm warning, and a flood warning, but who cares about that??)

I know some of you have had plenty of rain this spring and summer where you're at, but here in the desert, rainstorms are few and far between, and when they come, they're an occasion. We only get an average of 8 inches a year here, and the monsoon season in summer is when we can expect to get most of it. Last year's monsoon was more like a "non-soon" with no memorable storms, so this is exciting!!

okay, so I haven't scrapped a picture in years, but I've started to be inspired to actually print some of our digital photos, and do something with them besides leave them in cyberspace... part of it is two new books I got for my birthday (thanks, Mom!) involving altered imagery:

The Complete Guide to Altered Imagery- contains interesting ways to transform photos (bleach, sandpaper, and more); and the other title:

also good for inspiration are the following:

Ali Edwards' blog- simpler, classic layouts, with an emphasis on the photos

...and of course, there's the art journaling thing, like Crazyquilter on Flickr, Kelly Kilmer, Mary Ann Moss, and Jeanne Frizzell-- paint, stamps, collaging, markers, and whatever else you can find to stick (or stitch, or staple) to a page.

so... I'd like to see if I can meld the more "art-y,""journal-y" style of artwork with the more "traditional" scrapbooking I used to do, and come up with a hybrid that satisfies my new urge for "artsy" but still shows off the photos. For a start, we're going to drive cross-country to Illinois and Wisconsin at the end of the month to visit family; we spent Christmas sight-seeing in Arizona; last spring we went to Seattle: plenty of pictures for all this inspiration, if I just get them printed!!