I actually sold two sets of iris folded note cards from my etsy shop- how exciting is that!?! The same person bought them both, to give as gifts. I'm sending one set directly to the recipient, with a gift card, kinda like you get when flowers are delivered. I haven't done much crafting lately, but this has me inspired!

I also bought some flowers for the patio yesterday, and planted them today after work. It's amazing how much more home-y a few pots of growing things make even the smallest patio! One is a Carolina Jasmine, which is a vine with fragrant, yellow, trumpet-shaped flowers. I have it in a big pot with a 5 foot trellis stuck in it. I'm being optimistic here, because the vine itself is pretty spindly, but hopefully it will grow. The other pot is swedish ivy and two types of red salvia; I'm hoping the hummingbirds might try the flowers of the salvia... when they bloom, that is... right now, they're only buds. I have no idea how plants will do on the patio over the summer, considering that it faces west, so probably will get pretty hot, but I guess I'll find out!

and, a hummingbird update: I had been worried about the nest, especially with the wind and rain we had, but all is well! Yesterday, I saw the mama bird feeding two baby birds!!! Today, I got another glimpse of the babies, so I know I wasn't seeing things... now, I just need to find my camera!

Snow on the Mountains

I went for a short drive today after work, to take a couple pictures of the snow left over from the weekend storm. This is one of the best ones: Snow on Four Peaks. I really should have gone a couple days ago; the snow is already melting quite a bit. But, let me tell you, it's kinda cool to drive east in short sleeves with the window open, and see the snow off in the distance! The paper today said that this is the first time that snow has fallen as low as 2000 feet altitude in the Four Peaks area in many years.

On Sunday, I tried to talk Tom into driving up to Flagstaff. We decided to stay in, and it was probably a good thing- I turned on a local weather report, and they were reporting snow still falling, with 24 inches already on the ground! Altogether, Flagstaff got 30 inches of snow; Prescott got between 9 and 12 inches. Here in Gilbert, we got about 1 1/2 inches of rain between Friday night and Sunday morning; Queen Creek, which is much farther southeast (but still considered a suburb), reported 2.91 inches. The paper said this rainfall puts us at 70% of normal, which has lowered the fire risk somewhat. That's a good thing- but, I hope this bit of rain also helps the spring blooms, since I want to see some wildflowers out there soon!!! 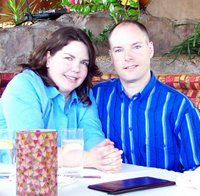 Here's a couple pictures from our 2nd anniversary brunch at Top of the Rock restaurant at the Buttes resort in Tempe. Who would have thought two years would go so quickly, and that so much would happen in that time?? I am so lucky to have someone in my life who understands me as much as he does... my Thomas.
Posted by crimsoncat05 at 8:38 PM No comments:

and cold, too- when I was out earlier today [I found a really nice new SB store 9Recollections, which is owned by Michael's Craft Stores) and I finally found an AVEDA store... yay!], I could actually see my breath! I have the HEAT on right now!! I didn't realize that the low spots around here are retention ponds without the water (I mean, yes, I knew, but I didn't know, you know??). Anyway, they're all full of water now... I saw on the weather channel on TV that the midwest and Ohio River valley is getting some severe storms too... hope you guys are all okay, and staying dry! interesting fact: weather.com says that right now (8:20 pm AZ time) it's 54 degrees (feels like 54 F)in Warren, IL but only 42 degrees (feels like 35 F) in Gilbert, AZ. How messed up is that?? (but by next weekend, it will be in the high 70s again.)
Posted by crimsoncat05 at 8:15 PM No comments:

We had a nice weekend; didn't do anything special, just hung out. I went to the rubber stamp show at the Mesa Convention Center on Saturday morning. I did see some beautiful samples, and bought a few stamps, but not too much came home with me. Here's a couple samples- The company that makes these stamps is Stamp A Mania, from Las Cruces, NM. They have beautiful wood-mounted stamps, and the image on the wood mount is laser-cut- that way you can use the stamp, or use the laser-cut side as a sort of mold... I wanted to buy the background one, but they were out- she told me they had brought over 30 of them, but were already sold out by lunchtime on the first day! (luckily, they have a website... LOL!) 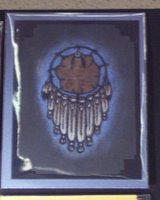 Below is a stamped page showing the stamps I did buy, all unmounted, and all AZ-themed... two of them are from an AZ-based company, Copper Leaf Creations... it's not a very good picture, so keep an eye out for one of them on a card in your mailbox sometime, to have a better look at it! They also stamped kinda light- I told Tom the black ink pad is running out and he said, "you mean to tell me you don't have any other black ink in all of that?" (he just doesn't understand art and craft supplies!) Actually, I only have one other black ink pad, and it's the Staz-On ink- very permanent, used for slick surfaces, metal, glass, etc. 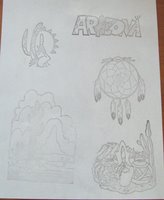 I was inspired by all that creativity, though, and had stuff spread all over the table for the rest of Saturday, and Sunday. I made some more designs with the embossing paste I bought at the last show, and I think I finally have a handle on how to use it. Having the kitchen sink near definitely helps- it's pretty messy stuff, and dries quickly, so it's best to wash it off of the brass stencils as soon as possible. I bought two kinds of paste- translucent, which dries clear (obviously) and glossy; and matte, which dries white with a matte finish. The dragonfly design was colored with ink before applying the translucent paste, then I sprinkled clear glitter onto it while the paste was wet. As it dries, the color shows through the paste and the glitter. The basket of flowers was colored with chalk, then the translucent paste was applied (no glitter). The purple coneflower (that one is for you, Mom!) was made using the matte paste applied through the brass stencil onto dark paper; after it dried, I colored it with chalk.

Saturday night we met some of Tom's friends from way back at a coffee shop... the owner is a former minister at the church Tom used to attend, and also plays jazz saxophone- it's a pretty cool place- there was an art showing by a local artist, there was jazz music playing in the background, and we just hung out and relaxed with our Chai on the patio, talking and catching up (Tom did the catching up, anyway)... we will definitely have to go back there!

Yesterday we had brunch at a local restaurant, relaxed for the afternoon, then grilled out for dinner... the apartment complex has gas grills which are in pretty sad condition for the most part, but one out of the four near our apartment works okay. (they're not exactly clean, but I'm hoping the high heat takes care of that issue... if not, I don't want to know!) We hung out and watched MythBusters on the Discovery channel all afternoon, which is a pretty cool show, if you've never seen it- the premise of the show is using scientific methods to debunk or prove "urban myths" such as "can a shark really sink a boat, like in the movie JAWS?" So, they build a fake shark in their workshop, take it out into the water, and try to replicate the scenario. Those guys have it made, that's for sure- getting paid to build stuff then blow it up, basically- how cool is that?

I hated to see this weekend end- we just did normal, everyday things, but those kinds are the most relaxing ones, in my opinion. And, of course, the weekend ending means the week work begins... then again, that makes us appreciate them all the more, I suppose. (I still don't like Mondays, though!)