playing with my birthday present--

In addition to spending most of the weekend crafting at the scrapbook store, I spent some time playing with my birthday present from Tom, which was a tripod and remote for my camera.  I had been talking about wanting one off and on; it's tough to hold the camera still, especially when using the macro lens.  Plus, I have a habit of sort of 'jerking' the camera a bit when I click the shutter.   The tripod made things so much easier!  I haven't used the remote yet, but maybe next weekend (early in the morning, when it's not hot as an oven outside). 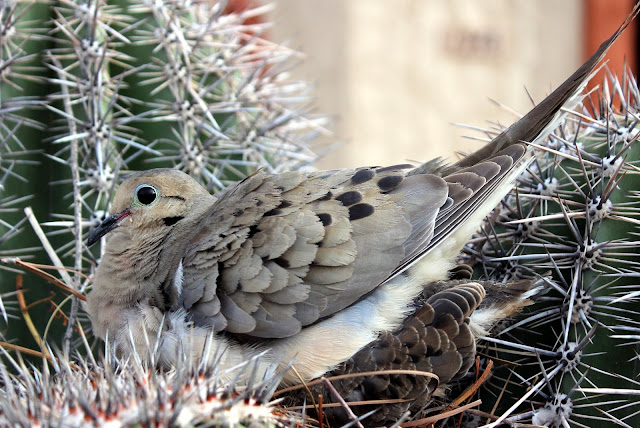 Our front yard tenant--  the second batch of babies came and went in a flash!  They're already gone, as of yesterday... :( 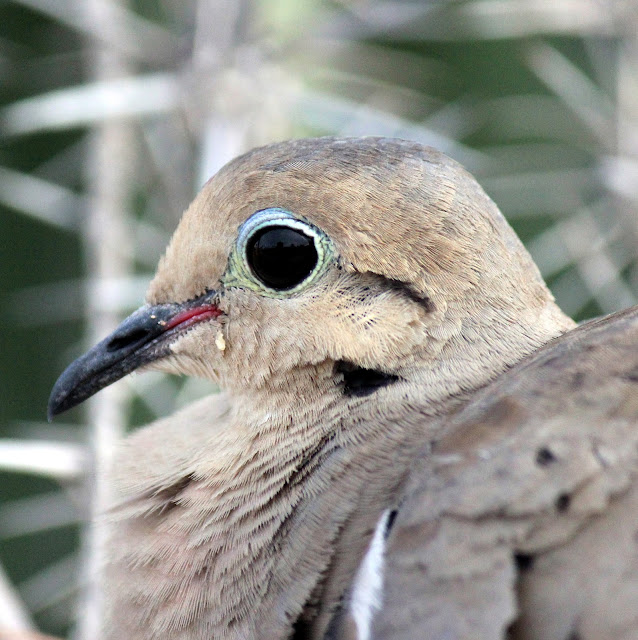 He (or she?) did NOT like me acting all 'photographer-y' out there, but would not BUDGE off of those babies- very protective! 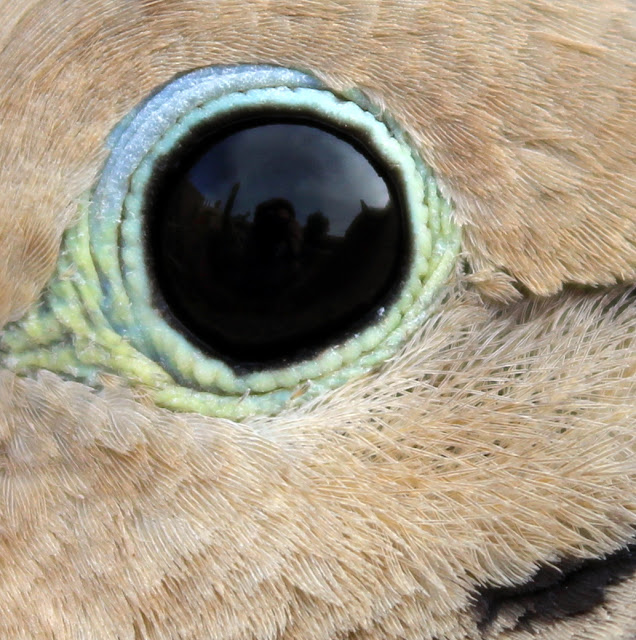 If you click on this photo to make it larger, you can see the tiny, tiny feathers right around the rim of the eye.  You can also see the reflection of the trees across the street in its eye!  How cool is that?!? 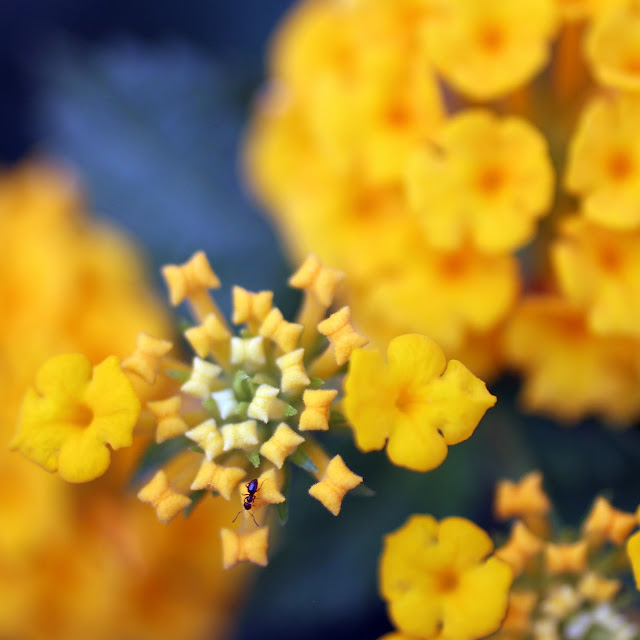 An 'almost-blooming' lantana-- they have compound flowers  (I think that's what they're called)-- each individual flower is tiny, and each flower head is made up of a bunch of tiny flowers.

After taking some photos of the dove, I decided to try my hand at the lantanas blooming along our front sidewalk.  Taking a photo of a 3D object with a macro lens is tough, because only one 'plane' of it is in focus at any one time, so I wasn't getting great photos, but I was having some fun with it, nonetheless.  I sat on the sidewalk, made the legs of the tripod as short as they could go, to see what difference the tripod would make. (it made it SO much easier!!)  The flower buds above were about the size of, maybe, a quarter?  If you take a close look at the center area of the photo, you'll see a very small visitor... 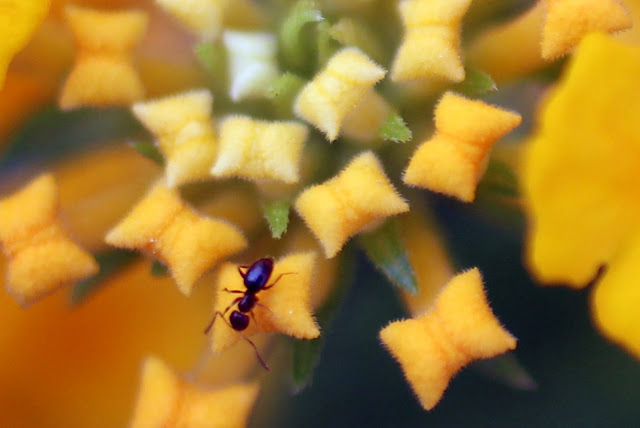 And here he is!!  In real life, he was maybe, 1/8 inch long?  He was quite industrious, looking for who-knows-what... nectar? pollen?  Not sure. 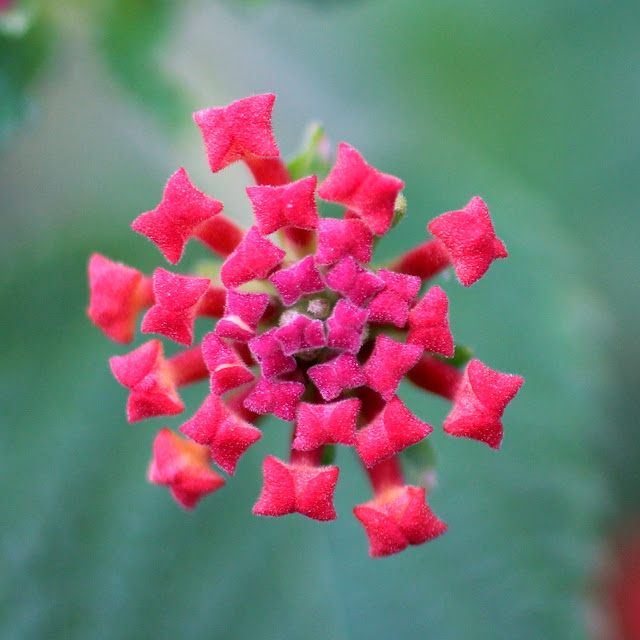 A red lantana flower head.  I've never really noticed before how odd these flower buds look-  It looks like they almost 'pop' open when they finally bloom. 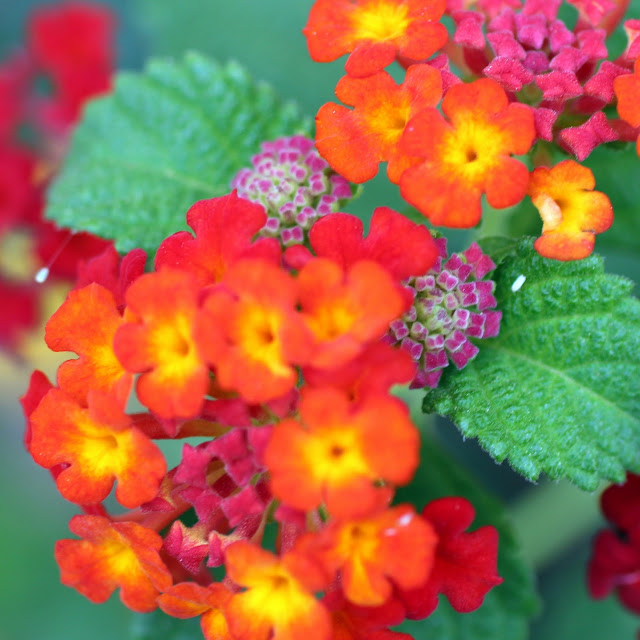 The focus here is on the tightest flower buds, so the rest of the photo is kind of fuzzy, but I still think it makes for a neat photo.

Lantana leaves are sort of fuzzy (and a bit itchy, when I'm pruning them back in the spring).   The photo below sort of shows why. 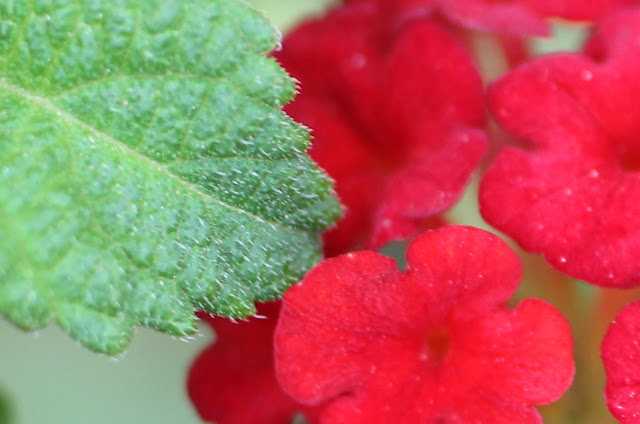 Make sure to click on this one to make it larger--  you can actually see the individual little hairs on the leaves!

So, I took about 60 photos in that first session, and I got about 10 that turned out the way I thought they would... that's the way of it, I guess.  Thank goodness they're only taking up digital space now, instead of film!  At least this way, I only have to print out the ones I want, and can leave the rest of them languishing in digital obscurity.  (I should really delete them, but I can't bring myself to do it, lol.)