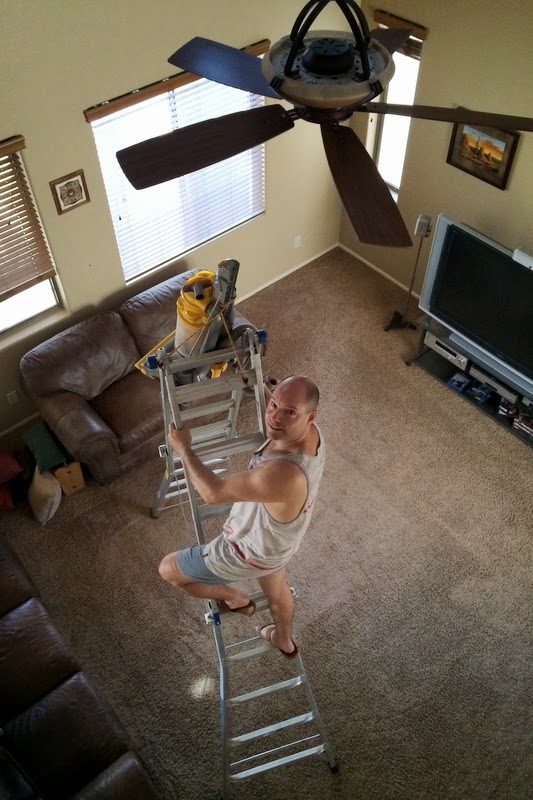 Tom hard at work cleaning the ceiling fan.  Our family room is a volume room (two stories high), so it's not an easy job. 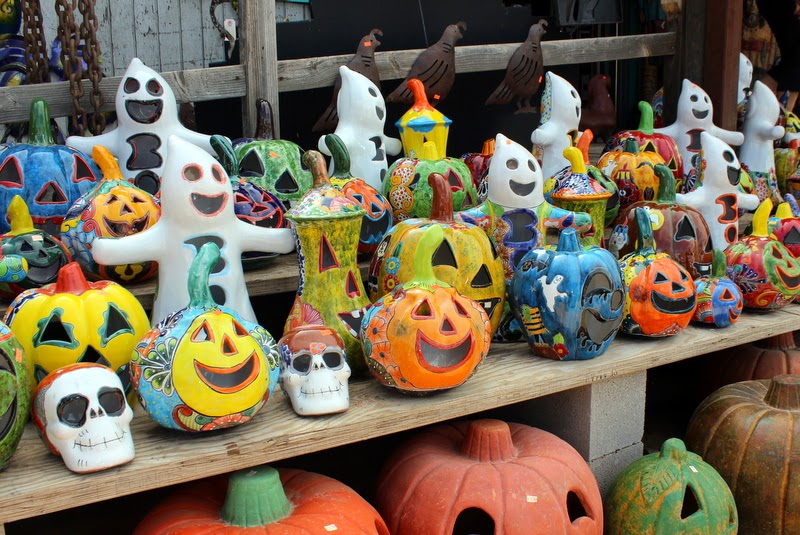 yard at at Buffalo Bill's: a row of metal bulls at the trading post, waiting for new homes. 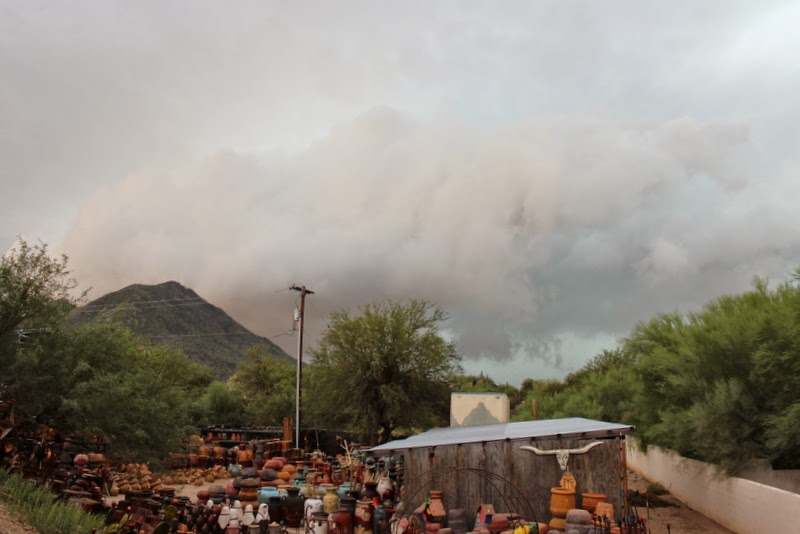 The coming storm- we watched it approach over the mountains.   And then drove in it all the way home. 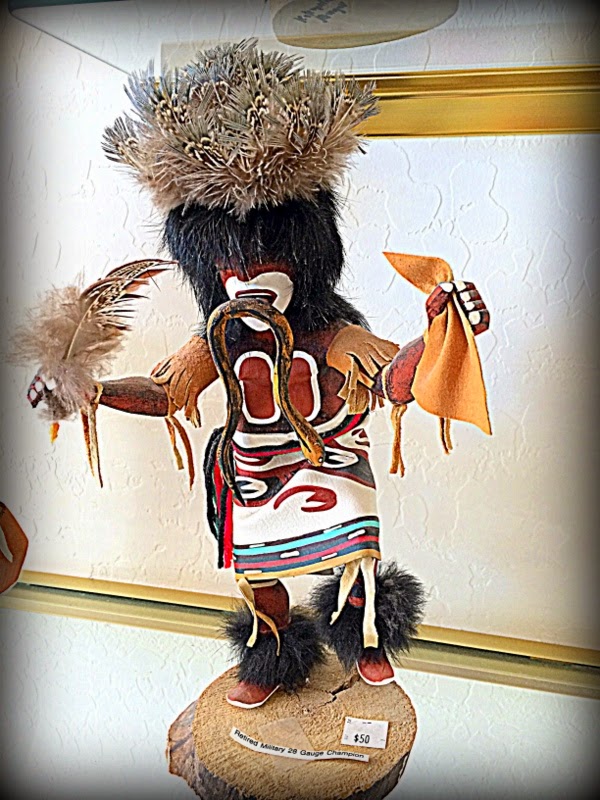 Snake Dancer Kachina doll- at an estate sale. I didn't buy this one, although I kind of wish I had, in addition to the one I did buy. The Hopi snake dancer asks the snake to carry a message for rain to the gods. The feather wand is to calm the snake, and the bag (? I think that's what it is) is to carry the snake. 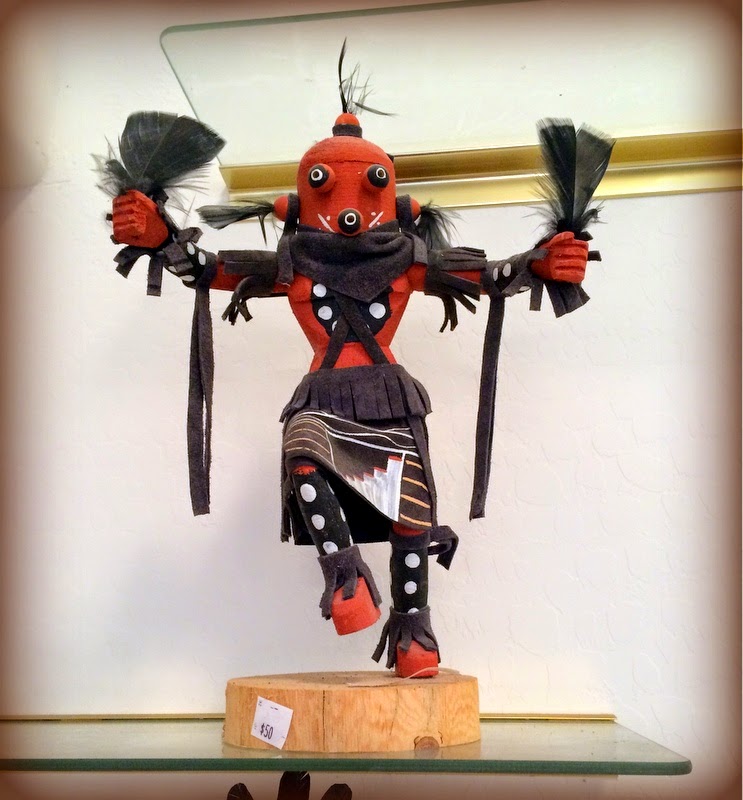 Mudhead kachina- this kachina is the one I bought... The mudhead is a clown kachina that may drum, dance, or  play games with the audience during the ceremonies. The name mudhead comes from the fact that they have mud applied to their masks.
(now we just have to find a place to display him that's cat-proof.)

Yup, I am still here! been busy with my job (like crazy busy!!), went to Hawaii for two weeks and took thousands of photos, you know... stuff like that!

Anyway-- I haven't had much time to craft or scrap, but I do still take tons of photos, and I would like to do something with them-- hopefully I can make some time for that soon.

Yesterday we were out and about... we drove to Cave Creek, AZ to (have lunch and) get new chili ristras to hang outside the patio. On the way back, I wanted to stop at Sprinkles to get a cupcake, but we got caught in the torrential downpours of the storm that moved through the entire Phoenix area, and there was no stopping anywhere after it started to pour. But, I still wanted a cupcake! So, Martha came to my rescue:


So, not quite the same as the ones from Sprinkles-- mine are smaller (I really don't need a huge cupcake anyway), and I must confess, I did use store-bought frosting, but they are yummy! (and way cheaper!! I made a dozen cupcakes for pretty much the price the one Sprinkles cupcake would have been.) Would you believe I think this is the first time I've baked a cake  from scratch in my adult life?? (well, cupcakes, but still...) I guess I figured mixes were always so much simpler... for the difference in taste, I don't think I'll buy a cake mix ever again!

Like I said, my job is crazy-busy right now (my supervisor left on maternity leave and starting last week, I'm her stand-in... yikes!!) but I have tons of photos to post-- from our trip to Hawaii, other places around AZ, last year's trip to New Mexico for the balloon fiesta, etc. So, it might be somewhat random (like usual), but I will post some of them soon! And hopefully scrap some of them, too!!