Seven years ago, I received a very intriguing e-mail from a man who shared my love of science fiction movies, and whose favorite actor was Hugh Grant. We started corresponding via e-mail, had some very long phone conversations, then decided to meet over lunch before going to the movies. During lunch we did lots of talking: among other things, we debated the merits of The Matrix vs. Star Wars as the best science-fiction movie series ever (...clearly, it's Star Wars!! LOL!) Approximately four hours later, we finally decided we'd better get to the movie theater before we missed the last showtime. 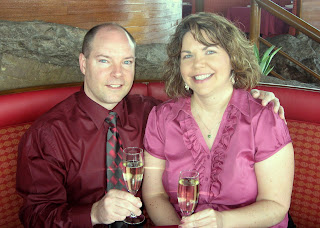 Now here we are, seven years later; we're still having lively debates about all manner of topics, and enjoying it just as much as we did during that first four-hour lunch. That e-mail was the start to an amazing journey... I'm very much looking forward to the next seven years with you, my Thomas!!

with much love, your Jenn