Mail Art... now, all can be revealed.

Since my mailart postcard made it safely across the miles to my sister Jackie, it's now safe to show it in public. I gotta say- when I finished it, I almost didn't want to send it, because I really like how it turned out... but, I really thought she'd like it, so I did it... I let it go, out into the world... amazing, how that's so hard to do with some artwork, isn't it?? 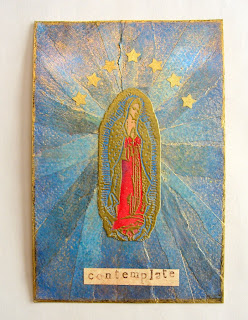 It's a 4 x 6 inch postcard featuring a heat-embossed image of Our Lady of Guadalupe. The background is one of my new favorite techniques, which starts with heavy paper, strips of magazine paper, masking tape, and paint. I found it in a Somerset Studio magazine article by Gail Russakov. The magazine paper and masking tape are affixed to the background (in a starburst sort of pattern, on this one), and layers of paint are applied. The different textures and colors of the tape and magazine paper "hold" the paint differently, to give really neat effects. There was also lots of scrubbing with baby wipes, gold acrylic, and gold Lumiere paint on this. The image was stamped and embossed onto cream-colored paper, then painted with thin washes of acrylic paint. 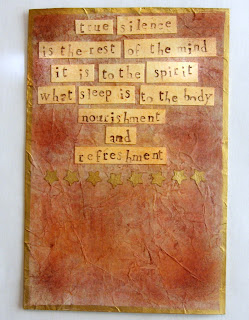 The back of the postcard started out as a vintage map out of an atlas (I picked it up at last year's used book sale at the state fairgrounds, and have only used a couple pages out of it). This also took lots of gesso, paint, more scrubbing, and ink to distress it and bring out the wrinkles. The quote on this side (and the word on the front) were stamped onto manila shipping tags, cut out, attached, then distressed with ink. I like it a lot, but I know if I tried to re-make it, it wouldn't turn out the same... so, I just need to come up with more mailart ideas. I like the format, and the size... sending them to people is pretty fun, too!

In other news, I finally had to turn on the AC here- the high today was forecast to be 97 F, five to 10 degrees above normal. I know I don't like cold weather, but this is a little ridiculous! (It's also been dry- they reported yesterday on the radio that it was only 2% humidity... I'm pretty reluctant to touch a wire hanger, a door handle, or even the pets- that static electricity hurts!)

Yesterday I had one of those days where I had to go tons of different places to run errands... sooo, as long as I was out, I stopped at a couple stamping/scrapbooking stores in the area. I started my day in Scottsdale, at Cigar Warehouse to pick up a few cigars for Tom, then hit Frenzy Stamper, one of my favorite stores in the Phoenix area. They have an awesome selection of stamps, altered arts supplies, and unusual stuff... at least an hour later, I finally had to leave before I bought out the store! (it wasn't that bad, really...) 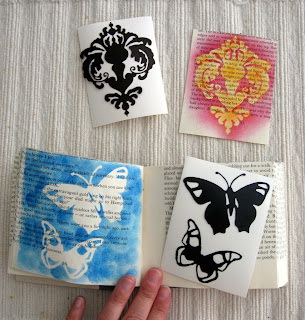 These are a few of my purchases from there- two new Heidi Swapp masks ("reverse" stencils, really... the design sticks onto the paper, so your paint or ink outlines it (instead of filling it in, like how a stencil works). These designs are a little more ornate than the previous ones I bought, so I tried them out with ink rather than paint. I tried them out in a little book I also bought there- it's a hardcover book, cut down to 4 x 4 inches... they had all sorts of shapes, like houses, pears, etc, but I stuck with basic square. I think I'm going to decorate the pages and use the book to display some of my ATCs, to get them out of the 3-ring binder they're now hiding in. 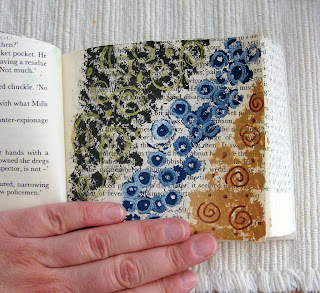 I also bought some more Adirondack acrylic paint daubers... (before, I only had black). From left to right the colors are Espresso Brown, Denim Blue, and Gold. I have been using the black one for edging cards, which gives them a really nice effect, so I decided to get some more colors. I also picked an ARTitude Zine, the third issue of Artful Blogging (which I still haven't opened-such restraint!), a really cool stencil, and a couple new sets of unmounted stamps from Invoke Arts (Tres Santos and Build Your Nest). I'll show those later, hopefully after I actually try them out.

After finishing up my shopping- pet store for cat food, chewies, bones, and a present for Sedona (oh my gosh, she's three!!!), grocery store, etc. I finally got home to relax for the evening with Tom, some homemade tacos, nachos, margaritas, and a movie. It was a good day!

If you google the term "mail art" you can find some really elaborate, even unusual, art that people have sent thru the mail. Apparently you can mail pretty much anything, from a message in a bottle (mailed in an actual bottle) to a rubber koi. (I found those examples on the internet.) These cat postcards were my first attempt at sending something decorated thru the mail; they were stamped and painted- the mouse and heart are cut paper. The heart includes glitter, and the yarn is real. They were sent out for a swap-bot swap, and made it to their recipients in New Zealand, Australia, and Canada just fine. I think I'll work my way up to the message in the bottle, though!

Handmade art postcard, now on its way to a lucky someone! I'm interested to see if this makes it to its destination in good shape... when I mailed it at the local PO; the woman working the counter thought it was really pretty. Maybe they take better care of cool-looking mail?? I hope so!

some of my favorites made with paper, glue, and paint

some of my favorites made with paper, glue, and paint Originally uploaded by crimsoncat05

just a little Flickr fun- a mosaic made up of some of my favorites!! (Click on the photo and you will be taken to the Flickr page; then you can click on any one of the links for a closer look at any of the individual photos.)

so, what more is there?? (well, lots, actually- I have over twenty pages of pictures marked as "Favorites" on Flickr, so far. There's so much to be inspired by! And I have been, actually; I have five or six things in progress in my craft room right now... well, I'm off to see if the paint is dry enough to continue!

(in other news: yesterday I had my second lesson in learning to drive a manual transmission... I'm managing quite well, I think, although driving 75 mph in 6 lanes of traffic on the interstate is still a ways off!)

this weekend, we hung a display shelf in my craft room above the work table. This will showcase some of my collectable items that had been hiding on the over-crowded bookcase. The items may/will change, but right now, the shelf holds some of my vintage children's books, a couple of handsewn rabbits (thanks, Mom!), some of my favorite cards and ATCs, and various other favorites that came to me from my Mom, Dad, Grandma and Grandpa., and other family members. It's amazing how much impact such a small change can make! (see my Flickr page for close-up pics of the items...)