Link to some great cartoons on YouTube: here Academy award winning cartoons... some wonderful ones from the early 20th century! I found this blog by way of Kelly Kilmer's blog, and had to post the link so I don't forget it. (and of course there are links on each YouTube page, to even more great cartoons...)
Posted by crimsoncat05 at 8:53 PM No comments:

wow, it's been a while... like usual- I really admire people who can post regularly, but I will never be one of them. Obviously, I did make it back from Chicago- finally. I was sooo glad to see the lights of the East Valley appear out of the airplane window as we came in for a landing at Sky Harbor Airport!! For a couple reasons- two weeks is too long to live in a hotel room, at least for me- I really missed our house, with our things and our furniture; I really missed Tom and the pets (two weeks is about the longest we've been apart since we met); and I was good and sick of all the cold and snow in Chicago! 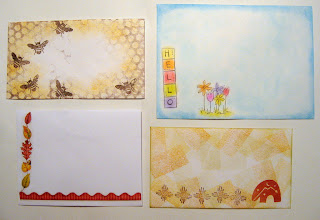 I took some craft supplies with me to Chicago, but didn't do too much with them... not sure if it was the cold weather, the impersonal hotel room, or the early darkness. Finally this past week, I've been in a creating mood again. These first two pictures are decorated envelopes for a swap on swapbot- mostly stamped, which I haven't done much of in quite a while! The swap was for a set of 10 envelopes to two partners. The only rule was that they couldn't be plain. Mine ended up mostly being rubber stamped (see all of them on my Flickr page). I haven't stamped like this in quite a while; it was really fun, and I ended up wishing I had made some extras to keep for myself. It was difficult to pack them up to send them off; hopefully the recipients will like them as much as I liked making them! 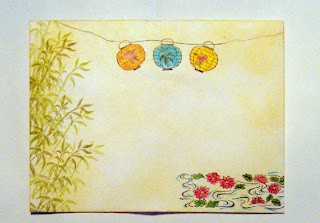 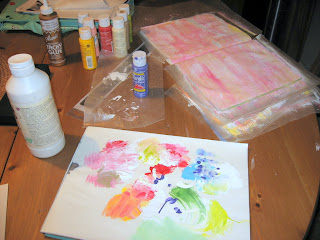 I also started a couple other projects this weekend. One is a visual journal, which I've wanted to do for a long time, but I've been reluctant to start it (that's because of my inner perfectionist, darn him- I've never done anything like this before, so I don't think my pages will be "good enough" so I just don't start). I finally got past the scariness of the "blank white page" by painting some backgrounds. I hauled my notebook, paints, and palette out onto the dining room table, so I could paint while we watched TV and waited for the Sprint Cup race to start... (Tom wasn't feeling good this weekend, so he hung out on the couch most of the time. ) 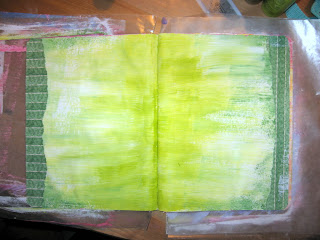 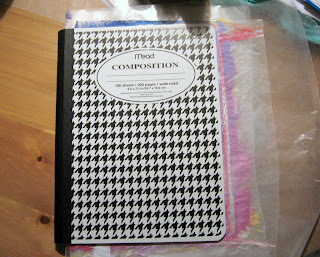 Now that I have some pages started, I can take the next steps and add more paper, stamping, texture, and all that other fun stuff! And then, of course, there's the cover, which looks pretty boring now, with only a black and white design... (see more of these pages on my Flickr page, too)

Next weekend is the Spring Fling rubber stamp show in Mesa, where I'll get more inspiration and ideas ... Sedona has an appointment at the groomer's, so I'll have a few hours of time to kill while I wait for her to get beautified... so I "have" to go, right?? lol!!

... as long as there aren't any airport delays in Chicago, that is. I've seen enough snow in this two weeks to last me quite a long time! They usually get just over 30-some inches for the entire winter here. It's only halfway through winter, and they've already had over 41 inches fall in the Chicago area! (and about 20 inches of it fell during this two weeks.)
Posted by crimsoncat05 at 5:50 AM 2 comments:

meanwhile, back at the ranch...

So, here it is Superbowl Sunday, and I am once again relaxing in my hotel room with Domino's takeout pizza, wine-in-a-box (more details later about that), and the Super Bowl on the television, alternated with the Animal Planet "Puppy Bowl" with the "Kitty Show" halftime show. I got in to Illinois last Sunday afternoon, for two weeks of training for my job... Tom is sometimes gone from home from early Monday morning till late Friday night; I knew this would seem a lot longer than that, but I didn't realize how quickly I would get tired of eating in restaurants, and living out of a hotel room. Luckily, my parents live about 3 hours west of Chicago, so I took the rental car Thursday afternoon (no work on Friday, due to an unexpected computer system outage) and visited with them, and my sister Judy, for a couple days. I made it back into the Chicago suburbs this afternoon, and got settled back into my hotel room right before the football game started. 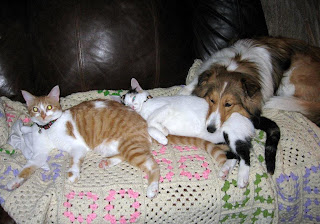 Tom sent these pictures early this morning... this pic is of all the pets relaxing yesterday on the couch... Butters looks like she doesn't really appreciate the interruption, doesn't she?? 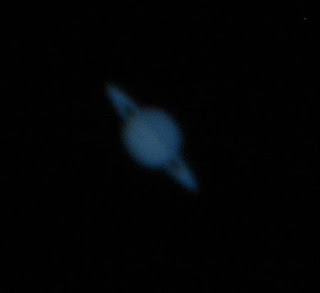 Tom spend a good portion of last night outside with the telescope- the temperature at home in Arizona was in the 40s (as opposed to well-below-freezing here in Illinois!) last night, and he set the telescope up... he said he didn't even expect this pic to work but it turned out quite nice, in my opinion. There are special cameras you can get to attach to the telescope and the computer, but we don't have anything like that- just the regular 35mm digital camera held up to the eyepiece on the telescope, right now... 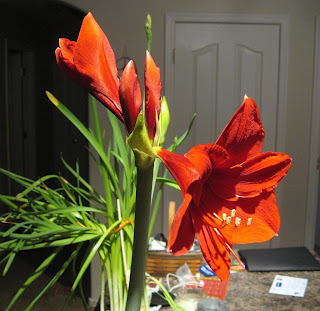 These are flowers from the amaryllis bulbs I have planted... they're set up on the island in the kitchen, to get light from the window (and to keep them out of reach of the cats). I had a feeling they would start blooming while I was gone; hopefully they'll hang on till I get back on Friday night. (The forest of green behind them is a pot full of paperwhites that haven't started blooming yet.)

It's amazing how long two weeks is, when you're not where you want to be. Two weeks of vacation for a whole year seems really short; two weeks till final exams is no time at all, when I was in school; two weeks living in a hotel room (when I'm really a "homebody" type of person) is waaaay too long. I did bring some crafty supplies (a few colors of acrylic paint, some papers, some ATC blanks, embellishments, that sort of thing...) with me, but I really don't feel like breaking any of it out when I get in to the hotel after work/dinner in the evening. I said something to that effect when I was packing my luggage- maybe I wouldn't even use them, and Tom commented "but it will be comforting to know you have them with you, just in case..." He knew just how I felt, even though I couldn't express it!

In other news, the 2008 Art Unraveled class schedule and instructors has been announced... I need to figure out which classes I want to take, so I can ask for those days off from work. I am really fortunate to have one of the premier "art retreats" within driving distance!! I heard about this event even before we moved to Phoenix, but I never imagined I would actually get to go! (for future reference, here are some of the classes that sound interesting to me: Printing Blocks MacGyver Style with Traci Bunkers, any of the classes with Kelly Kilmer, Brassy Brazen Backgrounds with Gail Russakov, and probably lots more. Well, it's back to the Puppy Bowl on the Animal Planet channel, for me... oh, and as for the wine-in-a-box, it's something I saw in the liquor section of the grocery store... wine in 4 single-serve waxed paper boxes... "juice boxes for adults" is what the advertising said, which is pretty appropriate... and it's not bad, for $6!