so, here's a few random things that have been in the works:


1) My scrapping room is finally evolving into its (hopefully) final form. It's about time, too, since we've lived here for, oh, over two years now- LOL! I've never been very happy with the arrangement of the desks or the amount of light on the work spaces, and I've moved the furniture around at least 3 times, but I think I'm finally close to getting it how I like it. (I used to do this when I was little, too; I'd totally rearrange my bedroom at least once or twice a year- remember that, Mom?)


Anyway, back to my current issue: I usually end up working in this room late into the evening, so decent light is a must! I have one decent drafting-type light on the main desk, but the only light the other work surface (which is our old kitchen table; how's that for re-purposing?) received was from one of those clip-type lights you can buy for around $5 at WalMart. Not exactly good lighting for actually seeing what you're doing! (and, since the desk was usually piled full of junk stuff when I wanted to use it, I needed another work surface for actually working at.) Tom just installed track lighting in his music room (lighting left over from our first apartment), and he suggested getting the same thing for my crafting space- that way, I can direct the light wherever I want it: brilliant!! (Of course, the room now needs to be cleaned, since the better lighting shows just how messy it actually is- please disregard the mess for now, and focus on the lighting!) 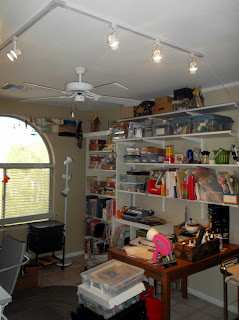 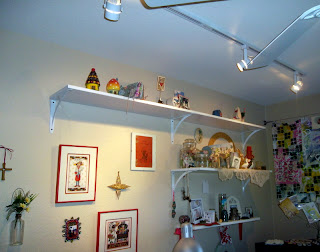 (once I get the shelves re-arranged, I'll take some close-up pics of the items on them to show you...
I have a pretty eclectic collection of stuff up there.

2) A couple new scrapbook pages, with more on the way. I recently signed up for a workshop on the scrapbooking site Two Peas in a Bucket, and have finally gotten back into the groove of scrapping. It's odd; my scrapping mojo comes and goes, and when it goes, it takes me quite a while to find it again. But for now it's back, and I'm taking advantage of it while it lasts! The class is The Hitchhiker's Guide to Scrapbooking, a 5-chapter course on scrapbooking taught by Shimelle Laine, with a humorous nod to Douglas Adams' classic book, Hitchhiker's Guide to the Universe. (which I need to read again, so I can get all the 'in' jokes that I think she's added into the class content.) The course is chock-full of handouts, ideas, videos, a private message board, 42 example scrapbook layouts, and tons of information, and so far I've made two layouts with ideas for plenty more! Here's my first two, both using some pretty old pictures from my pile of unscrapped photos: 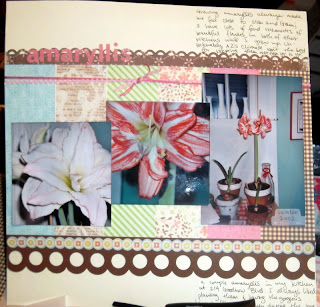 Both layouts are about the flowers and flower garden I used to have back in Illinois. I spent alot of time gardening, but that was in a different climate, and before we had 5 pets and a house to take care of!
(and before we lived in a desert- lol!) 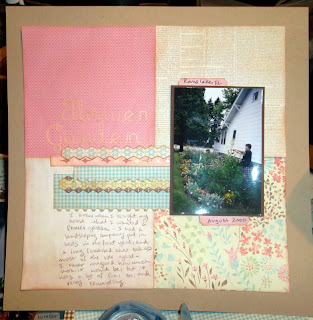 3) not so random, but spring is definitely in the works here in AZ! The high temps have been in the low 80s, the hummingbirds are extra-busy, and there are more hints of green appearing in the backyard grass. (the dogs are trying their darndest to find the greenest shoots to graze on... apparently they're confused and think they're sheep, rather than sheepdogs?!?) I guess they like a bit of salad with their dinner now and then- haha!


4) another random thing in the works for me isn't quite so fun: this Wednesday, I'm going to the endodontist to have a root canal re-done... re-peated... whatever the correct word is for that process-- Not fun!! But, neither is having an infected tooth, so I know it's best to get it fixed sooner rather than later, before it becomes more serious.


5) a more-fun thing I have in the works is some cute Easter cards: I have the idea; I have the supplies; I just need to put those ingredients together and make them. (once I pick up all the crap straighten my desk, that is.)


6) one more fun thing in the works is a weekend scrapbooking retreat in May at the Phoenix Scrapbook Cottage, over National Scrapbooking Day weekend- it's the cottage's one-year anniversary (already!), and they're having special stuff for the weekend scrappers: door prizes, dinner provided, and other assorted goodies. Since they were instrumental in getting me back into scrapping again, how can I pass that up? (answer: I can't!) So, I hope my mojo stays around until at least then-- or at least, it better not go very far, so I can find it again by May!
Posted by crimsoncat05 at 7:53 PM 1 comment: