...because there are a lot of other things I took photos of at the Botanical Gardens, too. I tried out my new camera and lenses while we were there, and took a ton of pictures. I took about 200 photos in just a few hours! Of course, not very many of them turned out, but still... there's no way I could show the good ones all in one post. So, this post is selected photos of animals, minus the butterflies- I'll post them separately.
(and a reminder: click on any photo to enlarge it for a closer look.) 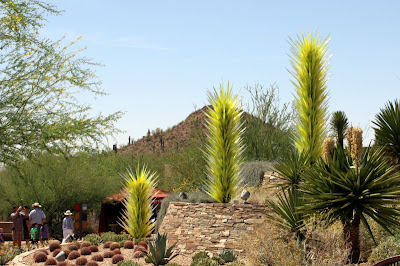 well, all animals except for the Chihuly glass sculptures at the entrance. I had to include a photo of those! We missed the special Chihuly exhibit when it was here in 2008, but apparently these three sculptures are now a permanent installation at the garden. (and I just Googled and found out that there will be another Chihuly exhibit in the Garden, starting in November 2013- yay!) 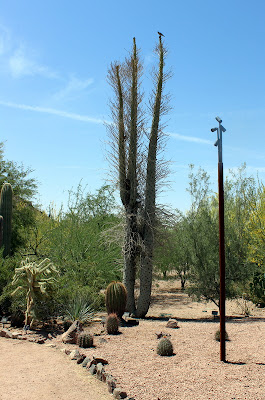 there is an animal in this picture, if you look closely. There's a dove balanced on top of this odd-looking plant, which is a boojum tree (a succulent related to the ocotillo). 'A remarkable looking plant, often compared to an upside-down parsnip, it naturally occurs only in Baja California and in a restricted area of Sonora, Mexico. Long-lived plants, some are thought to have lived over 500 years.' (this info was taken from the Desert Botanical Garden's website.) They are 'summer-dormant,' which means they lose their leaves during the summer, but they bloom  during this time. They're really strange looking plants, but somewhat compelling at the same time (and they're kind of expensive to buy, too; we've seen small ones at the nursery, in pots). 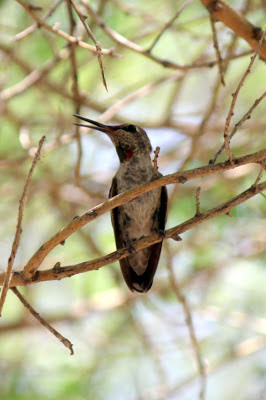 there's a lot to look at in the Botanical Gardens, but I didn't forget to look up into the trees! Of course, it helped that I heard this hummingbird chattering away... for a tiny little bird, they have a really large voice. 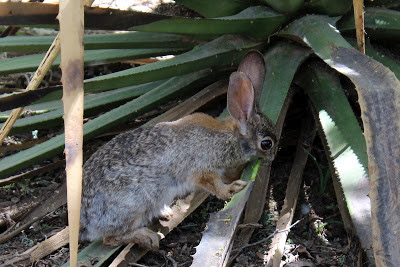 We were just walking down a trail, happened to look off to the left, and saw this guy having a snack just a few feet off the trail!! He didn't seem to mind us at all- just kept munching away. 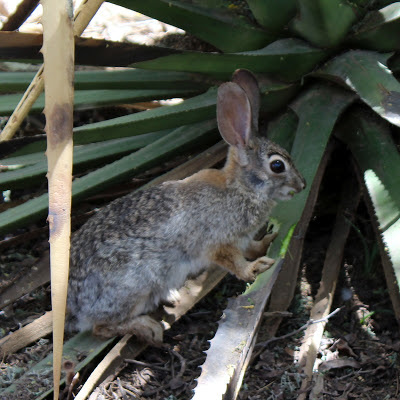 I caught him mid-chew in this photo... lol! A little farther down the same trail, we happened on some bathers-- 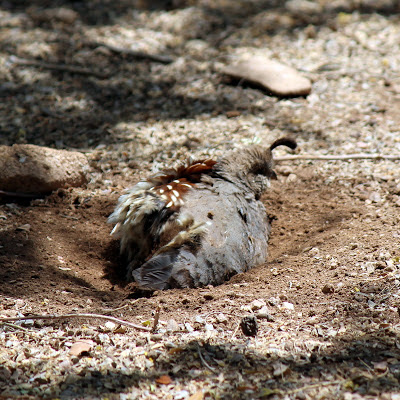 a couple Gambel's quail, taking dust baths underneath the trees. They were a bit difficult to see at first, till we saw the dust flying! 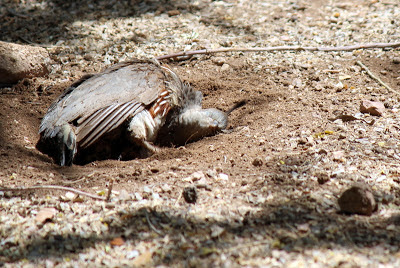 this one was very energetic!! 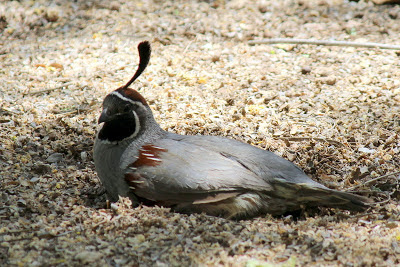 I've only just started figuring out how this camera works, so right now I'm still using the 'full auto' setting, which lets the camera do the choosing-- but I really like how it works so far! 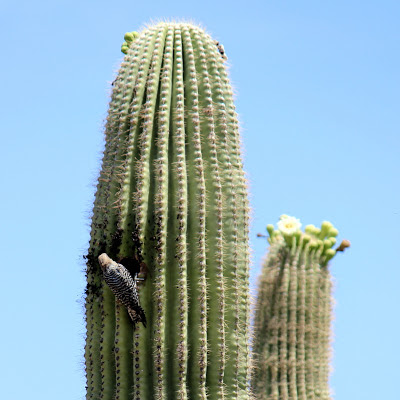 this fellow was quite industrious, but I managed to get a couple decent photos of him while he was working on making his nesting cavity in this Saguaro cactus. 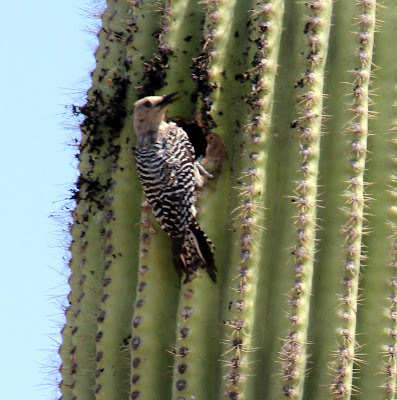 it looks like making a nesting hole is messy work. 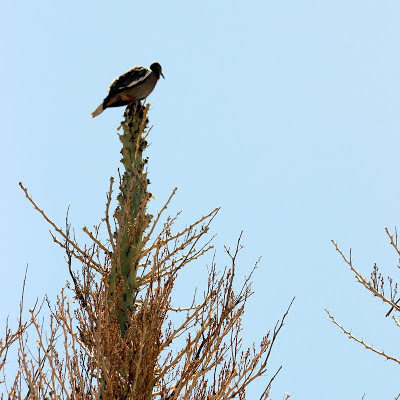 here's a closer look at the dove on top of the boojum tree. 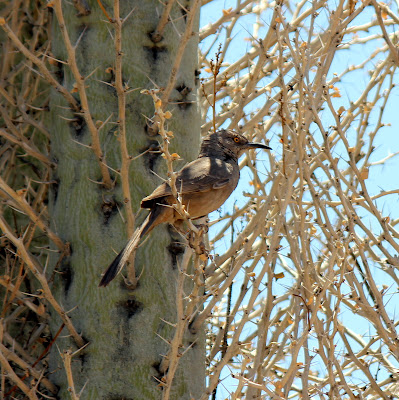 the dove wasn't alone on the boojum tree; farther down, I saw this bird, presumably keeping an eye on his nest. (see photo below) 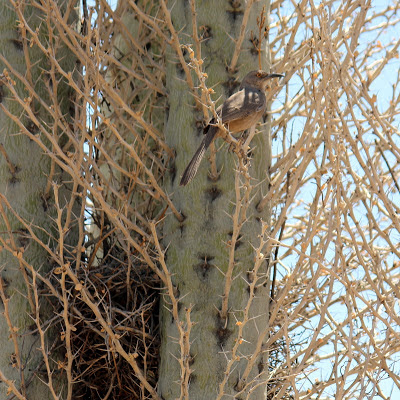 this plant actually is full of stickers-- smart bird!! The nest looks pretty safe to me. I don't think it's a cactus wren (they would be more brown-and-white spotted) but I can't remember what the poster at the garden said about bird species, and my Google skills are failing me. I really do need that bird book! Wait, I think I remembered it! I believe it's a 'curve-billed thrasher.' (still need the bird book, just to be safe.) 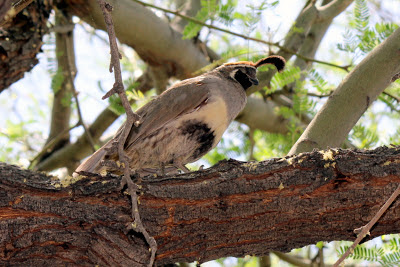 as we walked back toward the entrance, we happened to hear this fellow from up overhead- he was roosting up in the shade of a tree. I managed to get a couple good photos of him, although it was from a bit of an awkward angle. As we left the garden, we heard one more strange 'clacking' noise... I was looking at some plant or another, and said to Tom, 'I wonder what's making that noise?' He said he saw what it was, and told me to come look-- when I did, I was really excited to see this guy: 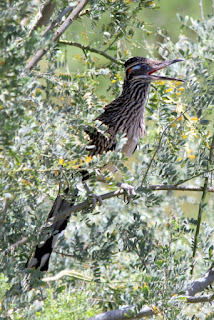 Although they don't look much like the Looney Tunes character, this is a desert roadrunner! Before this, I've only ever seen one from pretty far away (along the road, lol). I had no idea they could be up in trees, but this one was just hanging out-- the sidewalk went over a wash, which meant we were pretty much at eye-level with him as we walked past. He was quite noisy, too-- the clacking sound came from him banging his beak together. I got a few so-so pictures of him, then switched to the longer camera lens (he was obliging enough to stay put) and got a few nicer close-ups, like this one: 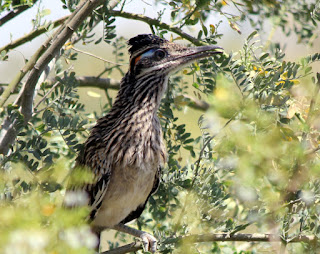 I had no idea they have those orange and blue patches behind their eyes! I don't know much of anything about them at all, I guess, except that they're chased by coyotes in cartoons. This photo really emphasizes the fact that birds' ancestors are reptiles, though, doesn't it?? He's 'interesting' looking, but not exactly handsome. Still really cool, though, that he sat there and let us take pictures of him!!

I have more photo-editing to do, and then I'll post pictures of the butterflies. And also some plants, too.

breakfast at the hotel

Early Saturday morning at the hotel, I had to get something (I don't even remember what) out of my car. When I went outside, I decided I had to go back inside and get my camera, so I could get a shot of this (click on the photos to enlarge them): 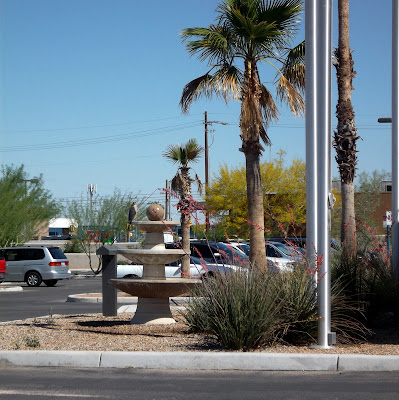 see him?? look close at the top of the fountain... 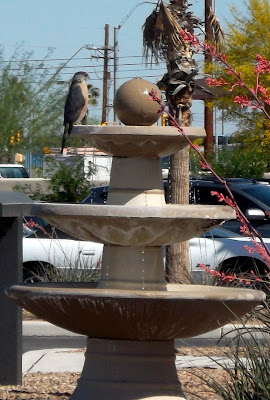 here he is closer-- after doing some Googling, I think it might be
a 'sharp-shinned hawk.' (maybe?? I really need to get a new bird book.) 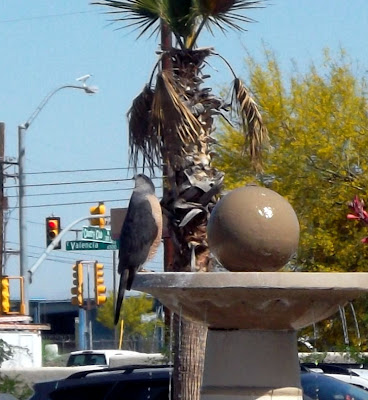 perhaps he was looking to have his breakfast at the fountain?
I got too close to him, though, and scared him off.

It was a long weekend, with way too little sleep, but it was a lot of fun. I might not have gotten much accomplished, but I met some really nice people, and shared lots of interesting stories. That's one of the great things about scrapbooking- it's all about preserving and sharing your stories and memories!

I got all my stuff back home on Sunday, and even unpacked it all already!! Everything is back in its place up in my craft room; now I just need to finish up the layouts I made while I was there. National Scrapbooking Day is this Saturday, so I think Saturday and Sunday might be scrapbooking days for me.  (after a trip to the Botanical Gardens Butterfly Exhibit on Saturday- more photo ops to practice using my new camera!)  And, I might even be ambitious and start a few more projects- there's lots of layout ideas rattling around up in my head.

I'll make sure to post pics of the layouts when I have them completely done! (or at least post what I have done at the end of the weekend, lol!)